In the poem by Emily Dickerson, she talks about her path within society and how along with her path she made for herself it became a lonely one. She didn’t want to fall within the path of greed and falling in love with objective things.  Through the diction of “divine”, and  “chariots-pausing-at her low gate-” this represents the denial of being like every other rich folk.  She refers to her soul as a stone because her shutting people out made her heart heavy. That’s why she said, ” Shut the doors”.  This poem represents one of the hardships that she faced through her life.

Blood Brothers by Randy Roberts is a book that is about “the fatal friendship between Muhammad Ali and Malcolm X”.  This book is good for my research paper because it not only shows their relationship, but it shows what the people in the NOI thought of Malcolm. While I was reading the book I saw that many many people perceived Malcolm as a threat. Not because he was violent, but because he started to get a lot of press and was becoming a very known public speaker.  On pg. 62 it talks about how some of Muhammad’s cabinet feared what Malcolm would do if Elijah Muhammad died. It also shows how Malcolm’s views also began to change more when he got involved in politics.

Another source I found was an article from NY Times titled, “Malcolm X is Assassinated by Black Muslims”.  I believe this article will help me with my paper because it shows how some of the people in the NOI changed their views of Malcolm. At one point he was highly looked upon by the Black Muslims but because Malcolm began to grow apart from the group they didn’t like him or his new views. Malcolm believed the NOI could do so much more and Elijah Muhammad didn’t agree with Malcolm wanted for the NOI. “Malcolm clashed with Elijah Muhammad, the leader of the organization, over the direction of the nation among other issues.”

The State of Delaware Monument is located just south of Gettysburg on Taneytown Rd in Pennsylvania.The monument is 11 x 8 ft with two plaques of 5 x 6 ft. The total expenses of the monument were $200,000. The front plaque is a picture of Delaware’s First Regiment repelling Pickett’s Charge on Cemetery Ridge illustrated by Ron Tunison and Richard Dayton. The plaque on the back is a list of 691 men from Delaware that fought in the Battle of Gettysburg. The monument is dedicated to all Delawareans that fought in the Battle of Gettysburg, both the union and the confederate; It was dedicated on April 29th, 2000 by the Delaware Civil War Society, a non-profit organization. The reason the monument was built was to remember how the soldiers from Delaware helped both the union and the confederate.

“The First and Second Delaware Infantry Regiments arrived on the battlefield early on July 2 and took positions in the Federal line along Cemetery Ridge. That day, both units distinguished themselves in fierce fighting. The First defended the Bliss Farm. And the Second helped to hold the Wheatfield against the Confederate attempt to turn the Federal left flank on July 3. The two regiments played key roles in repulsing Lee’s assault. They each lost nearly a quarter of their men at Gettysburg and were commended for distinguished service. Three soldiers received the Medal of Honor for heroism under fire and two for the capture of regimental colors. On July 5, the First and Second Delaware, with the Army of the Potomac, left Gettysburg in pursuit of Lee’s army.”

(These words are engraved on the back of the monument under the plaque.)

Malcolm X: A Life of Reinvention is an autobiography that talks about his life in general,  but in each chapter, it talks about a certain period of time in his life. Each chapter is labeled based on the time period, and what Malcolm was doing at the time. I believe this book will help my paper because it shows what his life was before the Islam nation, as well as, after being in the Islam nation. Which is a great start because seeing how he was before the islam nation and then after gives a good look on how he changed, and then how the Islam nation’s view may or may not have changed throughout the years.

I also found a website encyclopedia that talks about Malcolm as well. It primarily talks about him leaving the NOI, as well as, him encountering with Martin Luther King Jr. It says how he respected Martin as a “fellow leader of our people” but he did not approach things the same way Martin did. Occasionally Malcolm would criticize Martin publicly. It also shows how Malcolm wanted groups to unite together to make more of an impact, but because they approached things differently they never exactly united together.

Interview of my grandfather

The gas shortage, that affected many during their everyday life, happened in the 70’s. The Arab nations are the ones that produce oil for the U.S., but they introduced an embargo due to the U.S. helping Israel’s military. In other words, it was an official ban on trade. Thus the starting of the gas shortage in the U.S., and this actually was an eye opener to the U.S. because it showed we as consumers used a lot of oil.

As it continued the gas shortage got worse and then we finally gave out $5 per person, and there was a line a real long line… We would pump until we ran out of gas. People they would argue, and sometimes it would get to the point where they were fighting just to get into line.

Although there were long lines at most places, gas stations had their own rules about when they were open or who they decided to serve. Some had signs up that said “gas by appointment” and others that said, “regular customers only”.  After a while, some places began to use odd-even rationing systems and Oregan was the first state to begin doing so. Once the rationing system started it was Monday-Friday, Saturday was for everyone and then Sundays the gas station would be closed.

Jimmy Carter, the president at the time, had asked people to use less fuel. He had said, “We must not be selfish or timid if we hope to have a decent world for our children and grandchildren.” Because he had asked to reduce the fuel consumption some people decided to start carpool groups if they needed to go somewhere. Which helped more people to be able to go places. There were even carpool services that you could call. They began posting signs up about it. They had also started changing the speed limits on the roads and it was very enforced by the law. The motto was “drive slow and save gas.”  Jimmy Carter strongly encouraged to save as much as possible. He even said to use public transportation instead of driving.

In over a period of a year the price doubled, so everytime I was buying gas it cost me twice as much to buy gas which really hurt my budget. And I had to wait for customers to buy my gas at a higher price just to get my money back.

As you would imagine the prices of gas escalated tremendously. It sky rocketed through the ceiling. Gas stations had to make their customers pay more because they had to pay more to get the gas. If you look at the site below there is a graph that shows how high gas really was. As well as a comparison of what gas cost all the way up to 2007.

The graph can show you how years after the shortage gas eventually began to rise again. And although prices do slowly go up the U.S. saves a certain percentage of oil just in case of another embargo. They realized exactly how much oil we actually use, and it turned out we use 20% more than most of the world, and this is because we don’t necessarily like public transportation.

9/11 was a very traumatizing experience for the whole nation, but especially so, for the ones who had lost loved ones. They had to come face to face with the death of their father, aunt, uncle, mother, sibling, or child. In the article In Love With Death, a woman named Anne Mulderry had explained what the biggest struggle of the whole event was.  She had said, “How to resist to fall in love with death was the question. Depression and despair is one way of falling in love with death. Violence and aggression is another way.” I had never really thought about death in that way. To me I always thought to get back to reality with them not around was the hardest part. But the way she described it I think is the perfect explanation of what many felt on this day. She described anger, sadness, and pain. It truly shows how hard it was for them to actually let what happened during this day actually sink in. Every American there, no matter the skin color, they all dealt with the same pain and terror. 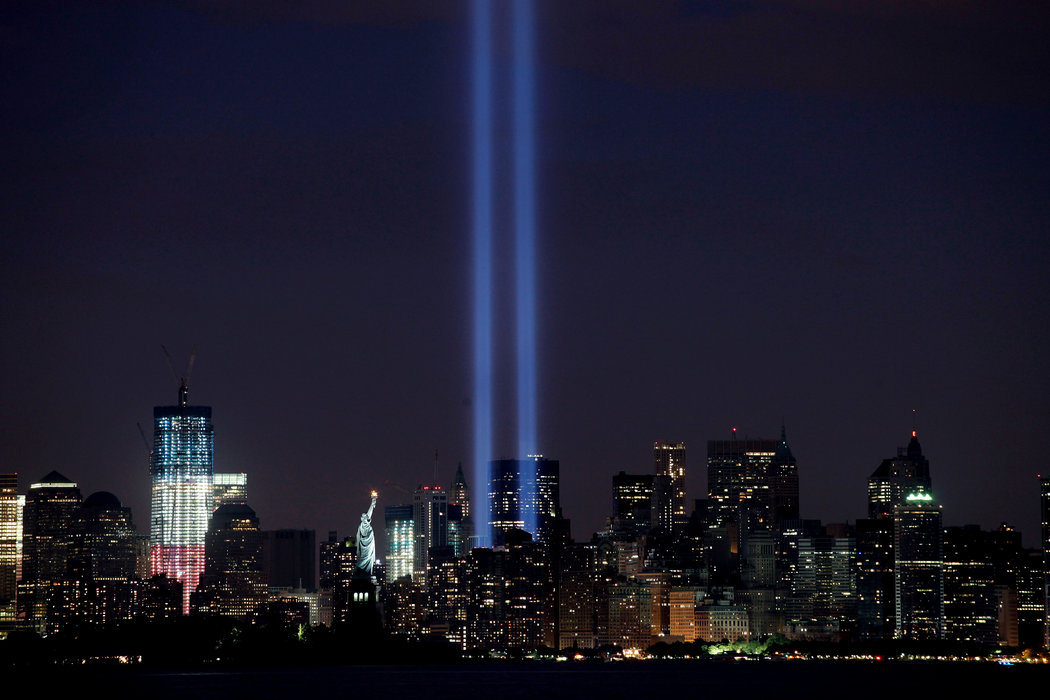 To show a tribute to those lost ones they had flashed these lights in the sky.  As hard as it was for them I believe every tribute there are for them helps the families grieve a little better. And it was amazing how everyone came together to help each other.

The thing that amazed me the most was the effort people put in to save the lives of others. In the end of the article, it tells you how these three people who were on the 89th floor who were going up and down 14 floors to help get as many people out of there. And apparently they never left the building, but they helped guide people out the building to save them. They risked their own lives to save others. Which is quite extraordinary to hear. It’s remarkable that people were selfless in a situation like this. At moments like this people aren’t thinking about race or your ethnic group they think of everyone equally. It’s quite fascinating because it shows us that we can all get along no matter the differences. All the people who died were all human, so why do we have to have a bad experience to be able to come together as one?

Welcome to STAB Blog Network. This is your first post. Edit or delete it, then start blogging!